The recording scheme accepts records in Excel or via iRecord. A handbook to Chloropidae is in preparation; a very early draft can be made available to interested dipterists, please contact John and Barbara to request a copy.

Chloropidae are small acalyptrate flies (body length: 0.8–9.5mm), usually black to yellow or with both colours. They vary from entirely pruinescent (= dusted) to shiny; their body shape can be everything from short and broad to greatly elongate. The setae are reduced in most genera and can appear as almost absent, while some have nearly all setae that are found in Acalyptratae. All Chloropidae have an ocellar triangle, but in some it is hard to distinguish from the remainder of the frons, e.g. in Lipara, and all British Chloropidae have a kink in the vein CuA1 where the crossvein m-cu would have been, but this is sometimes hard to see.

The biology of Chloropidae is more diverse than in most other families of Diptera except for Phoridae. Plant associated species either develop in growing plants, particularly in grasses, while others are scavengers and feed on the micro-organisms that grow in damaged parts of living plants. In Britain chloropids are also parasites or parasitoids of other invertebrates and predators and they have been reared from dung and fungi in Britain. Some cause damage to crops, in particular grain, grasses and reeds. Chloropids are important pollinators and they feed on pollen and nectar.

Images of the species included are shown below.

On this page you can:
Click an image to see a bigger picture 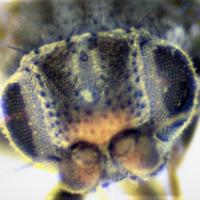