Checklist of Diptera of the British Isles 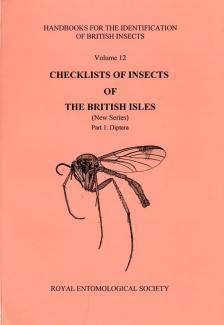 The latest version of Peter Chandler's British Isles Diptera checklist can be downloaded as a PDF (version at 28 July 2021, 2.5MB). An updated version will be made available whenever changes are published.

Corrections and additions to the checklist, also compiled by Peter Chandler, are regularly published in Dipterists Digest (and can be downloaded individually).

Corrections and additions to the previous British checklist (Kloet & Hincks, 1976) appeared in Antenna until 1996, but ceased for the reasons stated by Shaw, 1996. Peter Chandler compiled an updated Checklist which was published by the Royal Entomological Society (Chandler, 1998). In addition, a new Irish checklist was published in 2008 (Chandler, et al., 2008) and updates to that are published in the same way.

The Royal Entomological Society has decided that it will no longer publish Checklists in hard-copy format (because they need constant updating). Therefore, the current version of the Diptera Checklist, as maintained by Peter Chandler, is available for download here (in PDF format - see above). The file is replaced with a new version following the publication of changes in each issue of Dipterists Digest.