New checklist of the Muscidae and Fanniidae of Lancs and Cheshire 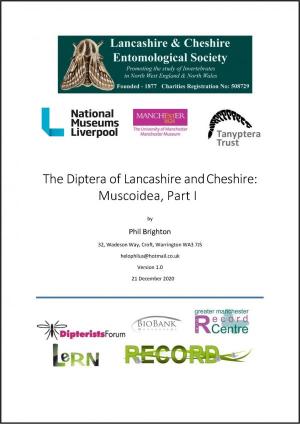 The Tanyptera Trust/North West Invertebrates project has been actively publishing checklists for a range of different invertebrate groups in Lancashire and Cheshire, incuding several that focus on Diptera. The latest in the series has been compiled by Phil Brighton and covers two families: Muscidae (houseflies and related species) and Fanniidae. It can be downloaded, along with the others in the series, from:

"This report provides a new regional checklist for the Diptera families Muscidae and Fanniidae. Together with the families Anthomyiidae and Scathophagidae these constitute the superfamily Muscoidea. Overall statistics on recording activity are given by decade and hectad. Checklists are presented for each of the three Watsonian vice-counties 58, 59, and 60 detailing for each species the number of occurrences and the year of earliest and most recent record. A combined checklist showing distribution by the three vice-counties is also included, covering a total of 241 species, amounting to 68% of the current British checklist. Biodiversity metrics have been used to compare the pre-1970 and post-1970 data both in terms of the overall number of species and significant declines or increases in individual species. The Appendix reviews the national and regional conservation status of species is also discussed."